A Decade of Double Nuts

Being jolted from one’s slumber at 1 a.m. by your wife is rarely a sign of good things to come. At least in the short term. But that’s what happened 10 years ago today when my doubly-pregnant, much-better half alerted me to the fact that, at just 32 weeks along, her water had broken and it was time to get the family show on the road. As in, to the hospital. Thankfully, everything went smoothly, all things considered. Megan’s OB/GYN happened to be the one on call for such late-night escapades, which was comforting. The epidural worked, which I suspect was even more comforting. There were no issues with delivery, or the Apgar scores or any of the countless things that need to go right during a single birth, let alone two. Gideon arrived first (a trend that continues to this day) with his sister, Charlotte, not far behind. They had to stay in the NICU for four weeks, but that was mainly to get their weights up as opposed to any developmental concerns. We were blessed indeed, and soon exhausted beyond belief. 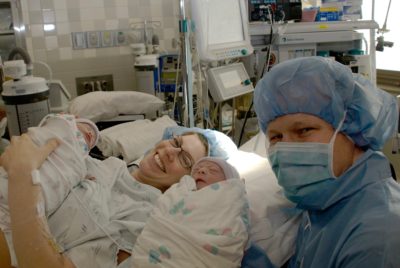 The fog and confusion that enveloped me over that initial 12-hour stretch has yet to completely subside. And I become even more discombobulated at the déjà vu created by our circumstances of today compared to then. Back then, I was freelancing, wondering how I’d support a family of four, and praying I’d be a good dad. Today, I’m back freelancing, praying for the resources to support a family of now five, and wondering if I’ll ever feel like a good-enough dad. But at least the kids are awesome. No, they’re not perfect. I have much photographic and video evidence of that. But that’s a silly thing to hope for, anyway. They are their own people. Similar to their mom and dad and each other in many ways, but unique in many more. Enough, in fact, to cause Megan and I to often look at one another and ask, “Where did these people come from?” Charlotte is about as creative as they come while remaining thankfully outside the “melancholy artiste” category. She makes connections between wildly disparate things and spins them into drawings, stories or songs that never cease to amaze. My greatest fear is that she’ll end up a copywriter. Hopefully, she’ll maintain her sweet nature, which would preclude such a path. Gideon was born with a furrowed brow (not an exaggeration), bent on observing the world and figuring it all out. That intense, observational eye has rarely blinked in the decade since. He loves math more than anyone with our combined genetic makeup should, but I certainly won’t complain about that. Ten years. In many ways, they feel like they’ve taken forever to fly by. I suspect the next ten will bring that odd juxtaposition into even sharper relief. After all, in another decade they’ll be in college or running a startup or touring coffee houses with keytar in hand or, I don’t know. But they won’t be here. Being loud, crazy, funny, difficult, amazing, inappropriate or insightful. And that is how it should be, even if I already know it’s not how I will want it to be. Happy birthday, kiddos. Your daddy loves you. And he always will. —– —–