Denver Agency is an 80-year-old independent insurance agency located in, wait for it, Denver, Colorado. The firm specializes in developing risk management program for high net worth individuals and families. The one percent of the one percent if you please. A longtime fan of @leeclowsbeard, agency principal Eric Gordon contacted me about giving DA a sharper, smarter voice that was more in line with his own attitude as he sought to separate the firm from the similar-sounding wannabes that made up the competition. So I did. After the brand voice work was complete, the client undertook the development of a new website with a local agency. Unhappy with their ability to capture the finer nuances of the brand’s new tone, Eric brought me in at the eleventh hour to completely rewrite the site’s content, which you can find here. 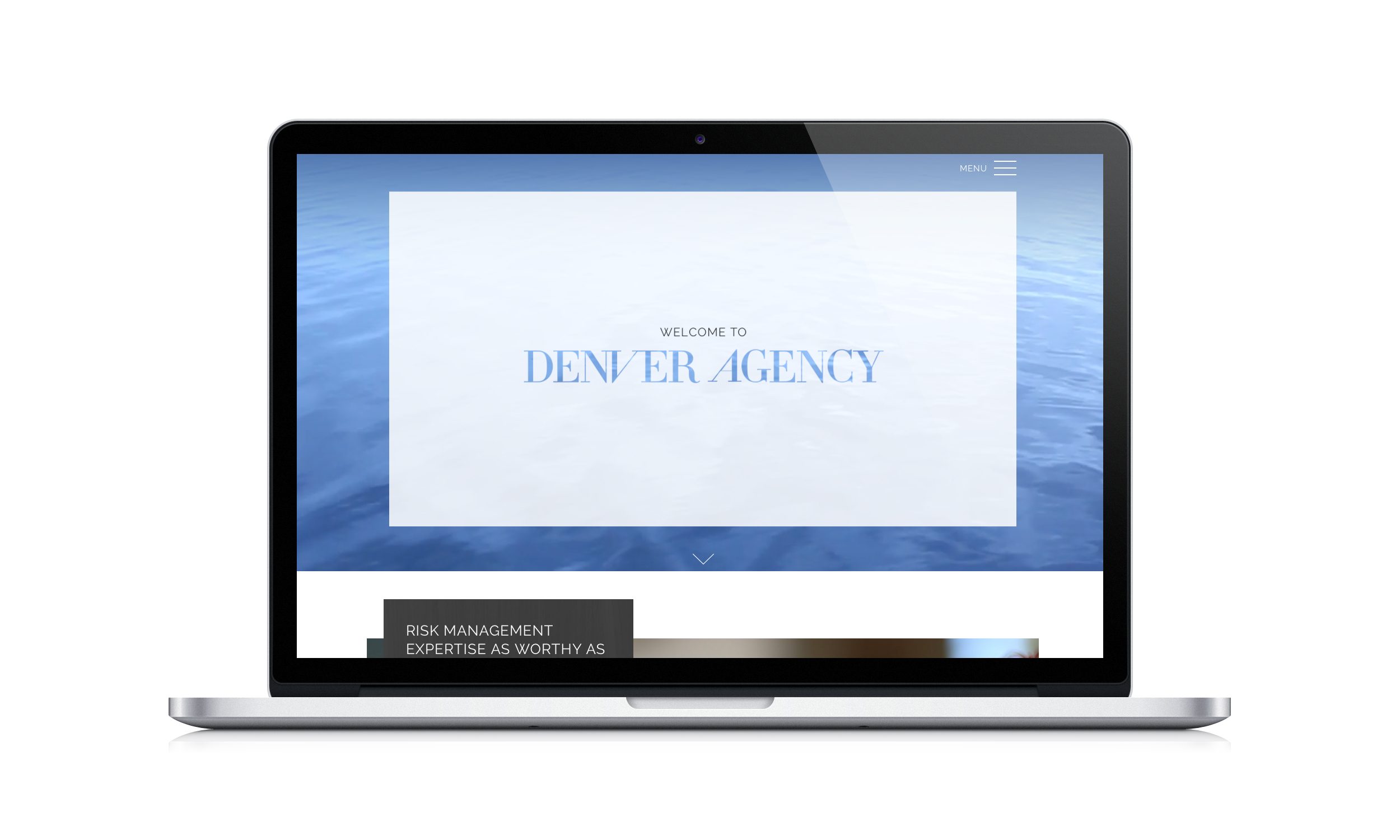 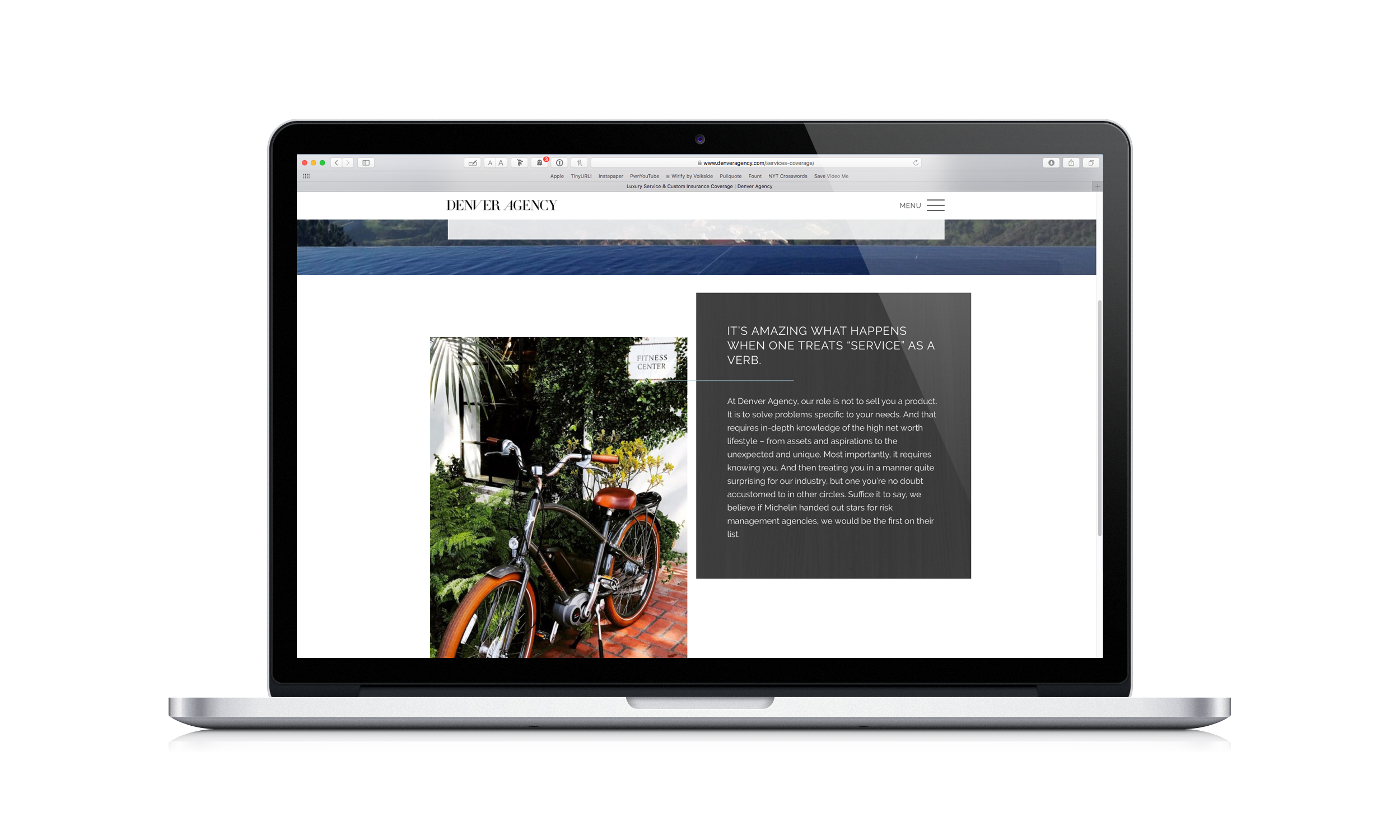 In late 2017, Worth Magazine invited Eric to write a quarterly column discussing the issues facing high net worth individuals and the insurance professionals charged with protecting their interests. In turn, Eric invited me to lend him a hand. With a pen in it. Okay, a keyboard, but that’s so much less poetic. Below is the copy and a screenshot from the 2018 Q1 column, which you can also find online here.

How does specialized travel insurance help you reconnect to what’s important?

Your family trip to Europe was finally set. After all the planning, research and schedule juggling—done between shuttling kids to activities and tutors, homework and the general busyness of modern digital life—you considered it a miracle that such a plan had come together at all.

This vacation was intended to be, as much as possible, technology-free. Yes, pictures would be posted and the occasional status update begrudgingly allowed. But with your kids hardwired for instant pixelated validation from peers both known and unknown, you saw this trip as a chance to disconnect them (and yourself) from all those screens and connect them to what really matters in life: a sense of wonder, the thrill of discovery, the shared moments and simple pleasures. And, though they’d never admit it—quality time with Mom and Dad.

Unfortunately, life, nature and circumstance often conspire to ruin the most well-intentioned plans. And when Iceland’s most active volcano, Grímsvötn, decided to spew ash literally into the stratosphere, your flight to Italy went up in smoke as well. Unfortunately, it took with it every nonrefundable deposit, booking, activity and reservation you had made. The loss of family time was disheartening enough, but the hefty financial toll you incurred wasn’t going to be easy to absorb either.

While the above scenario—volcanic eruption excepted—isn’t exactly rare these days, its disappointing ending is much more common than it should be, given the existence of specialized travel insurance.

Specialized travel insurance exists in a world beyond travel-booking websites and offers coverage that far exceeds the cursory indemnification offered by today’s credit cards—even high-end cards made of actual onyx and anodized platinum.

The difference is substantial, akin to the difference between winging it by opting for a conventional, limited policy and engaging an expert to craft something specific and robust. Honestly, anytime you travel and risk a potential material loss, you should obtain specialized coverage.

It’s true that many potential exposures exist in areas that “common” travel insurance addresses, but specialized coverage offers much broader protection and is tailored to the specific needs of the traveler. For example, a standard policy might offer only $25,000 of medical repatriation coverage while a specialized policy could provide $250,000 for the same exposure.

If the latter amount seems extreme, consider: How many standard-issue policies would cover an airlift from the heart of Africa to London for emergency surgery, as was required for one of our clients? That’s the power and peace of mind a specialized policy offers.

Of course, the more specific, unconventional and costly the travel plans are, the less likely a standard policy or carrier will provide adequate coverage (if any coverage is offered at all). Take, for instance, a wedding in Florence, Italy. General trip and event-cancellation coverage may not be difficult to obtain. However, when those coverage requirements include the costs of flying in 100 guests and housing them in a fully rented-out luxury hotel, the generous host would be remiss not to insure himself against being on the hook for over $2 million if plans go awry. Typical? Hardly. True story? Indeed.

When the time comes to acquire such a policy, then, you’d be wise to select an agent who is as specialized as the coverage being sought. Someone who understands and appreciates your lifestyle and has the relationships and resources to construct best-in-class coverage for a worse-than-you-imagined scenario. Your agent, like you, should want travel to be not a misadventure fraught with risk but an adventure filled with family, friends and memories made to last a lifetime.

And if you’re really lucky, that adventure will include the realization that Mom and Dad are pretty decent travel companions after all.

In 2019, Eric was asked by Four Seasons Magazine to document an upcoming journey to East Asia he was set to take with his youngest son. All of his experiences, mostly my words. Read it below or right here. 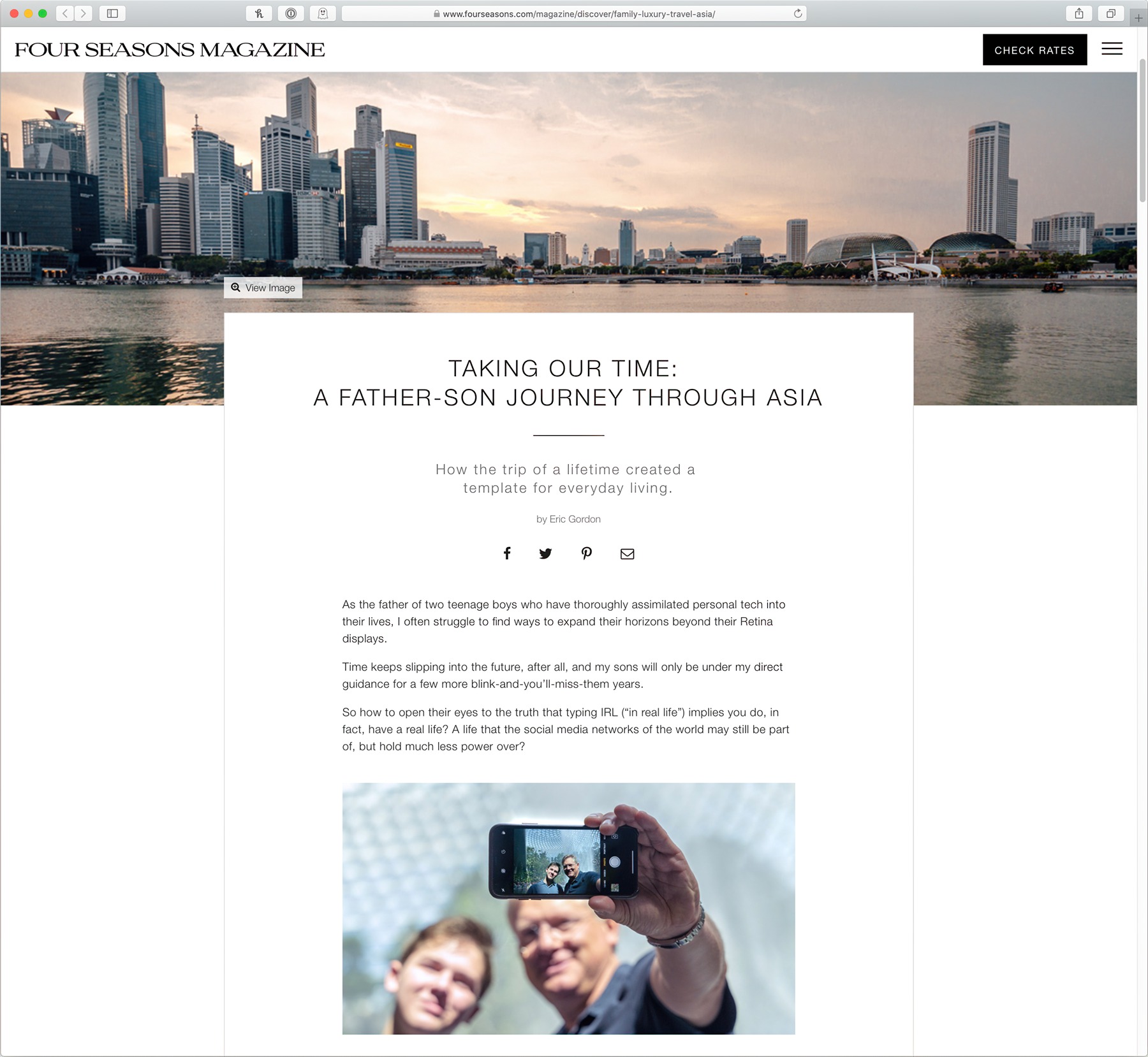 How the trip of a lifetime created a template for everyday living.

As a father of two teenage boys who have thoroughly assimilated personal tech into their lives, I often wrestle with the issue of how to expand their horizons beyond their Retina displays. Time keeps slipping into the future, after all, and my boys will only be under my direct guidance for a few more blink-and-you’ll-miss-them years. So what, I pondered, could I do to open their eyes to the truth that IRL (in real life) implies you do, in fact, have a real life? A life that the Instagrams, Facebooks, and WeChats of the world may still be a part of, but hold much less power over.

Obviously, finding the answers required a trip to the Far East.

Experience has shown that teaching two boys the same thing separately requires less time and effort than attempting to teach them that same thing together. This approach has served me well and led to some memorable one-on-one outings. None more so than the trip I just completed with my youngest son, Jack. Wanting any lessons learned to endure as long as possible, I decided to make this particular excursion a little more, as us GenXers used to say, extreme. So, embracing my 15-year-old’s love of travel, I wagered that three weeks in foreign lands living life unfiltered would reveal the importance difference between seeing an image or video about a place and actually experiencing it. That difference being that the former is a life-by-proxy while the other is truly living.

The journey of 1,000 miles may begin with a single step, but our journey of 25,000 miles began with a long-haul flight from Denver to London. (Because if you’re going to explore the other side of the world, why not take the long way around?) Having previously stayed at the Four Seasons Park Lane on business, Jeremy Dawson and James Birkett (the hotel’s Assistant Manager and Valet Supervisor, respectively) immediately recognized me and went about initiating Jack into the fraternity of world travelers – which culminated with a jaunt in the hotel’s Rolls Royce for a meal with friends at Gymkhana. A restaurant I would argue is the best of London’s 10,000 Indian restaurants, not that I’ve tried them all quite yet. As a good of a way as any for easing Jack into the cultural landscapes he was about to experience. Also, I have a real weakness for curry.

Our first proper stop on the other side of the world was Singapore, where we were both immediately taken aback by the scale, scope, and sensory overload of the Jewel Changi Airport complex – which includes a 130-foot-tall waterfall, the largest indoor water feature in the world. But as the point of this trip was not to simply stand in different spots and take selfies as proof of our escapades (although we certainly did that), I decided to enlist some help. In this case, help came in the form of Gladys Lim, our concierge at the Four Seasons Singapore. After explaining to Gladys that my goal for this trek was to help Jack tangibly connect with the wider world, she knew just who to call – Natalie Chai, who would become our trusted tour guide and Jack’s confidant.

Natalie, as you would expect any good tour guide to be, was a font of information. And while certainly interesting and perspective-expanding, the factoids she imparted paled in comparison to the impression she herself made on Jack. Somewhere among the city-state’s famed hawker stalls, possibly after a round of chili crabs at Chijmes, Jack and Natalie became friends. IRL friends. And while they will stay in touch via technology, it is the bond they formed on the streets of Singapore that will forever tie them together. Even if, eventually, only in one another’s memories.

That was the beauty of this trip. Those small (but not really) moments of personal interaction where only a smile or Google-translated phrase was enough to cross all manner of cultural barriers. Little shots of human connection and personal humility that can only come when, say, you find yourself and your 15-year-old man-child in a YouTuber-endorsed dive of Shanghai noodle shop eating more sesame pasta-based carbs than even a marathon runner could manage.

Or enjoyably enduring the most definitely unexpected celebrity status countless Shanghainese bestowed upon Jack, whose picture many of them coveted for reasons that remain a mystery.

Or marveling at what are undoubtedly the best croissants humanly possible at the Four Seasons Pudong. (Not to mention the joy on Front Office Manager Kimmy Li’s face when she revealed their pastry chef is indeed from Paris.)

Or welcoming the unrivaled calm of the immaculately manicured Imperial Palace grounds – a veritable island of introspection after the whirlwind ramen-based adventures of Tokyo Station’s underground mall.

Or lingering in the very Four Seasons–esque farewell from Mari Oshitani and Mami Kumoda in Tokyo, who stood waving goodbye until we boarded our train for the airport.

Because of these moments and dozens of others, the Jack that’s upstairs in his bedroom as I write this is not the same Jack I boarded a plane with. Is it a big change? Not especially. Not yet. But the idea was to redirect the way he views the world and his place in it. To that end, score one for dad.

To be honest, I’m a bit chagrinned that a column like this needs to be written. That we actually need to remind ourselves that life is meant to be a participatory sport. But the world is what it is so here we are. Fortunately, I know I am not alone in seeking a more balanced life for myself and those I love. To actually embrace important (as opposed to just big) moments without being separated from them by a device that technically captures an event, but often prevents us from making it meaningful. Which is sad, because how grander are our kids, our friends, our very humanity than can be viewed through that all-too-tempting screen? Exactly. Now if you’ll excuse me, I’m going upstairs to chat with my youngest and relive our time in Shanghai’s French Concession.