The Bat-Bull of West Omaha 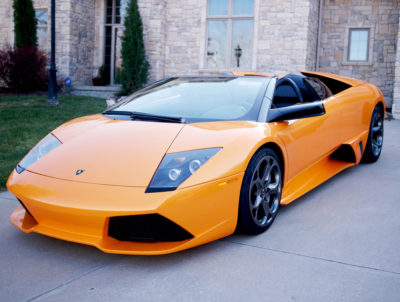 For the past few years, the preferred corporate combustion-powered mill has been a 2.0-liter, turbocharged, 4-cylinder engine. Beloved for its ability to twist a decent amount of low-end torque while delivering CAFE-friendly miles per gallon, it easily slips into almost any engine bay. From Acura to Volvo, every major car manufacturer not run by a Musk has one thrumming along in everything from subcompacts to SUVs.

But it wasn’t always thus. Roll back the chronometer just a bit and you’ll find a more traditional striation of engines: Four-pots for econoboxes, V- or straight-sixes for midsize sedans and crossovers, and mighty V8s for those big on luxury or hauling or both. And at the edges of this easily understood trifurcation lived a few more extreme examples of gasoline-powered pandemonium. Turbo-8 Bentleys from the U.K. V10 Vipers from the U.S. And the most aurally seductive of all, raucously sonorous Italian V12s like the one found in Sean Glassman’s Lamborghini Murciélago.

More precisely, a Lamborghini Murciélago LP-640 Roadster in Arancio (Orange) Atlas. Sean, who operates the real estate firm Blue Steel Investments when he’s not patrolling downtown as a nine-year veteran of the Omaha Police Department, acquired the car a couple of years ago from a Baltimore-area dentist. Originally, the Lambo was owned by noted exotic car specialist Ed Bolian. This provenance, along with the car’s specifications, persuaded Sean to pull the trigger after several years of searching.

“I knew it came from good hands and it was well cared for and everything. It was the exact spec that I wanted on the car, and I paid a little bit more because of it,” Sean revealed. “But I’m totally fine with that.” Though he won’t disclose the final purchase price for the car – one of only 300 or so that exist worldwide – Sean did attest that the amount was “worth every penny.”

Historically, Lamborghini names their cars after famous fighting bulls, with Murciélago being a legendary Spanish beast from the last 1800s. Yet, Sean’s initial connection with the model stems from both a different creature and a different form of entertainment, having first taken notice of the Murciélago range when it was featured as Bruce Wayne’s daily driver in the 2005 film Batman Begins. “Murciélago means ‘bat’ in Spanish,” explained Sean. “Just seeing that car and then watching videos of it on YouTube. The sound of it…I was just absolutely obsessed with it.”

Sean, who grew up a gearhead in a family lacking in automotive enthusiasm, would eventually get into buying and selling cars during the few years he spent in California as a fitness model. When he returned to Omaha, he partnered with a pair of firefighter friends and started their own dealership. His intial steps into exotic car ownership included Dodge Vipers and a Ferrari or two – an F430 currently shares garage space with the Murciélago. When asked about maintenance issues, Sean claimed his car has yet to experience any major problems with his 631-horsepower topless brute, explaining, “These engines are built for racing. They’re built to endure some really intense thrashing and keep running.”

While he’s not afraid to put actual miles on his exotics, Sean admits the Lamborghini – with its wide girth and slam-bang automated transmission – was never meant to play the part of grocery getter (that duty falls to his pickup truck). Nonetheless, he has no plans to part with his personal Batmobile. “It’s such an event to drive,” he enthused. “It’s unique in so many ways and unlike any car I’ve ever driven. That’s why I love it.”

← What a Fool Believes