The Relentless Pursuit of Pablum 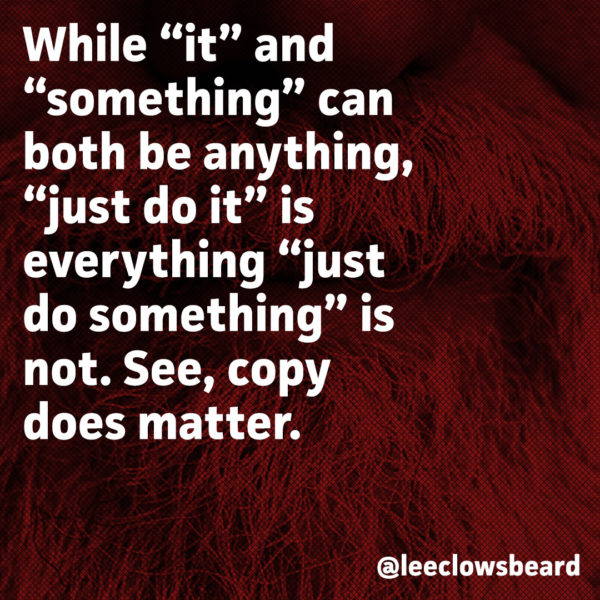 As an ad nerd, I love a good tagline. Think different. Just do it. When it absolutely, positively has to be there overnight. We try harder. But taglines (or slogans if you call pop “soda”) are tricky things. They’re quite easy to get wrong – even more so than most everything else branding-related. They’re easy to make too trite, too obvious, too obtuse, too clever by a turn, too forgettable or too overstuffed with “messaging.” So, at the risk of turning this column into a listicle, I’d like to offer some advice based on four decades of paying attention to the world around me and two-and-a-half of writing more than a few taglines myself. Pick one message. Unless you’re Miller Lite circa 1974, chances are you’re not going to get away with saying two things in one tagline (and I’d even argue that Miller Lite’s was a single message as neither “tastes great” nor “less filling” meant anything without the other). Yes, this forces you to define your business and its purpose in very specific terms. That’s a good thing. Remember, that one thing doesn’t have to be a product feature – it can be an emotional pull or a shared state of mind. Like Nebraska City’s “Red to the core.” (I may have written that.) Keep your voice. The fewer words you use to say something, the greater chance there is of it sounding generic. That’s just how language works. But maintaining your brand voice is imperative if you want your tagline to ring true. And if your overarching brand voice is already generic (no “We’re all about…” please), well, now’s a good time to fix it. Set realistic expectations. Most taglines are not destined to enter the popular culture in any real way. And that’s okay. Because it takes millions upon millions of dollars in media to accomplish this feat. Instead, understand that your tagline acts as a nice reminder of what your brand represents – both practically and attitudinally – to your customers, reinforcing your awesomeness every time they see it. Better yet, a good tagline can act as a great battle cry for your employees better than any Successories-style mission statement ever could. Also, only Nike is Nike. Accept that. Don’t mess with a good thing. If you’ve managed to create a memorable, ownable tagline, don’t screw it up. Sure, times change and businesses change and consumer tastes change. But don’t change your tagline just for the sake of change. Take Lexus, for example. When they launched in 1989, their tagline was “The relentless pursuit of perfection.” Spectacular. That was the goal of their company – to never quit refining their cars regardless of the obstacles. Then, a few years later, they removed “relentless,” implying they’d get around to perfection if it weren’t too much bother. Today, it’s the hyper-generic “Experience amazing.” Which sounds like a headline from a billboard for Big Zeke’s Reptile Emporium and Gator Wrasslin’ Expo. Avoid this (both the tagline and Zeke’s). Honestly, it is wiser to forgo having a tagline at all than to attach a mediocre one to your brand. But if you manage to craft a great one, you’ll wonder how you lived without it. As a calling card, a mantra and a reminder of what’s important – all rolled into a few, well-chosen words – an exceptional tagline has no equal in ad land. — This piece originally appeared as the “Brand Brief” column in the April/May 2018 edition of Omaha B2B magazine.

← Missed It by That Much Beating Marketing FOMO →