Interview with a Dead Guy – Nikolaos of Myra 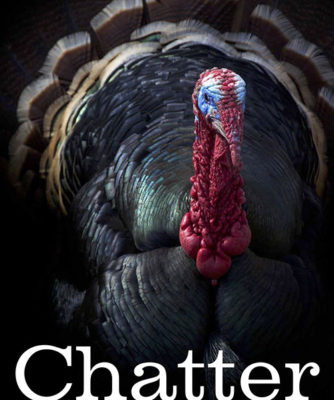 ’Tis the holiday season once again. Soon we’ll all be busy with sash throwing training and demanding figgy pudding from bell ringers and forgetting what our wives said they really wanted for Christmas this year back in February so how could we possibly remember such a thing I mean seriously am I right? But before that madness descends upon the land like a blanket of new-fallen dread, Chatter has unwisely enlisted my services once again to interview a Major Religious Figure of suspect mortality. That’s right, as you may have guessed from the title, this year the royal we will be interviewing the man, the myth (except he’s real), the legend (again, except real), Nikolaos of Myra, Saint Nick, aka Kris Kringle, aka Santa Claus, aka Sir Fatman of Jollytime. Chatter: Thanks for taking some time to, as we say, chat with Chatter. St. Nikolaos: Would you like some coal? Chatter: Was my wordplay really so bad as to land me on the naughty list? SN: No. Well, yes. But it wasn’t that. I’m just a firm believer in coal. All things compressed dinosaur, really. I mean, it’s magic, isn’t it? Take a stegosaurus, apply time and compression, and you end up with a rock you can either use as a snowman’s eyes or light on fire! Chatter: You know, coal isn’t a very PC power source these days. SN: I’m an orthodox Christian saint. You want PC, go talk to St. Man-Bun of Patchouli. Besides, you know what the Willie Nelson crowd would rather I put in the naughty stockings these days? Chatter: I’m not allowed to make a pot joke in this publication. SN: Nor should you be, young snapper of whips! Chatter: I’m 44. SN: I’m 1,746. Anyway. I’m talking about biomass. Biomass! Do you know what biomass is? Chatter: Sustainable? SN: As long as folks forgo flushing, yes. Chatter: Perhaps we should start over. I know this is your busiest time of year… SN: Oh, please. I’ve been doing this gift thing in one form or another for 17 centuries. We operate like a mechanized whirligig thoroughly lubricated with hog fat! Of course, everything’s computerized now. So as long as Microsoft doesn’t release a “critical update” to Excel… Chatter: They’re all critical. SN: I know, right? Well, as long as they don’t do that on Christmas Eve, we’ll be fine. I do have a mid-level elf maintain a scroll-based backup of the naughty/nice spreadsheet, but dealing with Hermey has been quite unpleasant since he flunked out of dental school, so it’s best avoided. Chatter: Interesting. Now, let’s back up a bit. You were born in the late third century in what is now modern-day Turkey to wealthy parents. SN: Yes, that’s true. My father invented the earliest known form of Wite-Out and made a fortune. His big discovery was getting it to work on marble tablets. Chatter: You’re joking. SN: Of course I’m joking! He made his money the old fashioned way – playing keno. But they died in an epidemic of some sort and I was then raised by my uncle. He’s the one who got me into the priesthood. Chatter: So just how did you go from priest to bishop to saint to a jovial fan of red velvet snow gear? SN: As far as sainthood goes, that’s not really my doing. I helped some folks out, said some prayers, some thought the results were miraculous. I know not. But pretty soon people are seeing your silhouette in their muesli and what are you going to do?  As to the red suit, what can I say? It’s comfortable. Especially the new one L.L. Bean made for me. A good set of Gore-Tex long johns beats the snot out of vestments made from 1,600-year-old goat hides any day. Chatter: Does it bother you that when most Americans picture you they see a rotund character from an early 20th-century Coca-Cola ad that vaguely recalls Burl Ives? SN: Are you kidding me? If I can go to Starbucks without people pestering me for free gift cards, I’ll take the slightly deceptive anonymity. Chatter: And how do you respond to critics who claim you’ve become too popular – even more of a symbol of the season than Jesus? SN: First, I claim such cultural befuddlement is the work of Old Scratch himself, the Great Pumpkin. Second, I advise everyone to keep things in perspective. Christ bestows upon all who would receive him the gift of eternal life. I bestow Xboxes and gray-market American Girl dolls. Chatter: So, just how do you manage to leave toys for all the world’s good little girls and boys in one night? SN: My headquarters is next door to the Fortress of Solitude, so I subcontract 99% of the deliveries to Superman. Chatter: And the other 1%? SN: I like Taos, what can I say? Chatter: Final question, and it comes from my oldest son who is eight. Why is everything you leave under the tree made in China? SN: Would he rather get some artisanal biomass? — Nikolaos of Myra, 270 – 343, was the only son of wealthy Christian parents who lived in Myra, Lycia in what is now the country of Turkey. His parents both died during an epidemic, leaving the young Nikolaos to be raised by his uncle, the bishop of nearby Patera. Nikolaos himself eventually rose to the rank of bishop, and was one of the signers of the Nicene Creed in 325. His reputation for anonymous gift giving became the template for Santa Claus (the name being an iffy transliteration of St. Nicholas many times over). There is probably no truth to the rumor that his love of a good bargain led to the rise of Black Friday. He does, however, prefer homemade chocolate chip cookies and almond milk on December 24. Source: Wikipedia, give or take This guest column originally appeared in the November/December 2016 edition of Chatter Magazine. A lovely image of it laid out from the magazine is inserted below. 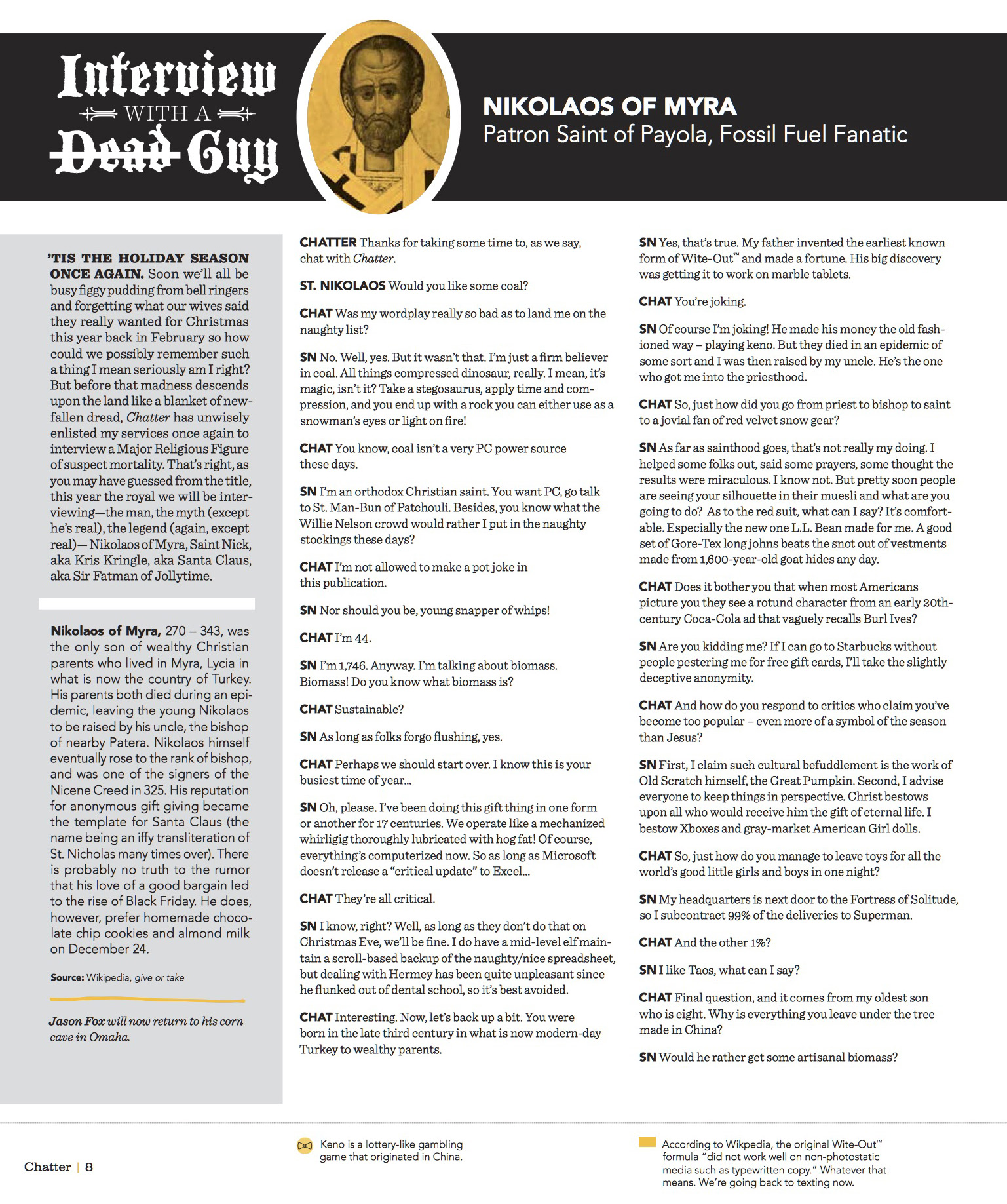