Greed is the Enemy of Great 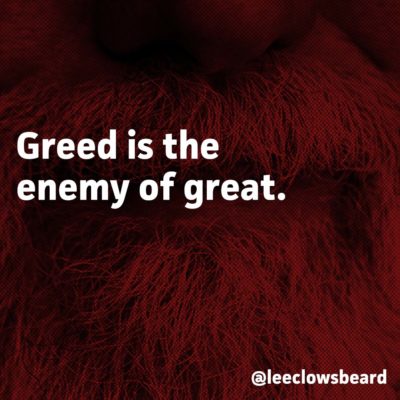 With the exception of die-hard Gordon Gecko aficionados, few people will publicly state that “greed is good.” Even though more than a few among us don’t necessarily blanch at the supposed rewards of greed – wealth, power, a snappy (if you opt for suspenders) wardrobe, etc. – they still disavow the label, arguing that they got theirs while the getting was good through hard work that may or may not raise the ire of the SEC. But that type of greed – nemesis of all that is pure and just to be sure – is not the enemy of which I speak. No, when it comes to great advertising, I’m referencing a different type of avarice – something I call “soft greed.” It’s a greed that is usually unintentional, often practiced by generally good people, and always detrimental to the creation of great work in the short term and a great brand over time. At its root, soft greed is the insistence that there is always a little more to be had, even when the evidence and/or scope of work suggest otherwise. Soft greed rarely begins as anything approaching actual vice. Instead, it starts with the desire to, say it with me, “get the most bang for the buck” from one’s budget. And there’s nothing wrong with that; we all want the most we can get for the money we’re about to get rid of. But there comes a point in all transactions when one or the other has reached its limit and something has to give – either we accept what our money can buy, or we increase our budget. Soft greed pushes beyond this logical state and insists that a little extra “value” can be squeezed from the same amount of money. When a client asks for this gratis bit of bonus thinking, the agency is, frankly, likely to acquiesce. After all, they want to please the client, maintain the relationship and get more projects from them. So, bitter pill it may be, they eat the cost. But that cost isn’t just in the revenue lost, nor is it the sole dining pleasure of the agency. Creativity – even and perhaps especially commercial creativity – has a value. The budget should not merely reflect an expected number of hours to be expended, but also the value – in what it does for the brand – of the work to be produced. And when that work effectively gets discounted by producing additional goodness without additional remuneration, it signals to all involved that the work never really had that much inherent value to begin with. And that creates a fracture in the client/agency relationship. Even if no one acknowledges it. Even if everyone denies it. Even if it is imperceptible at first. The client values the work less than the agency, so the agency produces work that theoretically matches that value. Yes, they may continue to push for better solutions for a while – but if the soft greed sets in as the new normal, they won’t continue stuffing the client’s 10-pound bag of work with 20 pounds of their best thinking. A malaise creeps into the relationship, the work slides towards the mediocre and whatever momentum may have been created morphs into the type of inertia that leads to account reviews. In the end, it comes down to trust. If, as a client, you trust your agency when they give you an estimate, you’re less likely to slip over the line into the land of soft greed. And if you don’t trust your agency, chances are they’re exhibiting the other version of soft greed themselves. Which begs the question: Why are they your agency to begin with? — This piece originally appeared as the “Brand Brief” column in the August/September 2018 edition of Omaha B2B magazine. As the magazine is changing its editorial structure, this is the final edition of this column.